Auto assembly line and automation solutions in production, robot integration testing system for more than 10 years has become the leading strength and key point in the development direction of CNCVina.

We are a pioneer in technology and solutions to help domestic and foreign customers solve production problems. Including upgrading of line and machinery improvements. Provide automated solutions in manufacturing, assembling and testing their products to improve productivity and increase profits.

The auto assembly line for laser scanning part (CIS automation assembly line) in Laser printers is one of many assembly lines that have been supplied to customers by CNC-VINA. Mechanical parts and electronic components mass-produced according to the conveyor system are taken to assembly parts for assembling into complete assemblies, complete blocks before being transferred to the next stage or shipped to customers.

Assembly machines, assembly lines in general and CIS automatic assembly lines for printers in particular give customer peace of mind in production because of accuracy, stability in operation and calculated productivity. correct math from the design stage. Reduce downtime between maximum stages and optimal cycle time.

– Auto assembly system through 4 automatic assembly stages. Is a combination of product supply structures, specialized conveyors. Lift and place products on automatic rack tray with ABB’s robot with 6 degrees of freedom. The system is controlled by the output parameters on the monitor screen.

– To move the product between stages Using the air-clamping system is mounted on the Slide controlled by a high-precision servo motor.

– Reduce the number of workers manipulating. 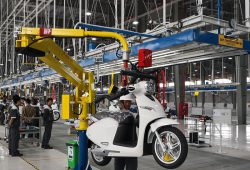